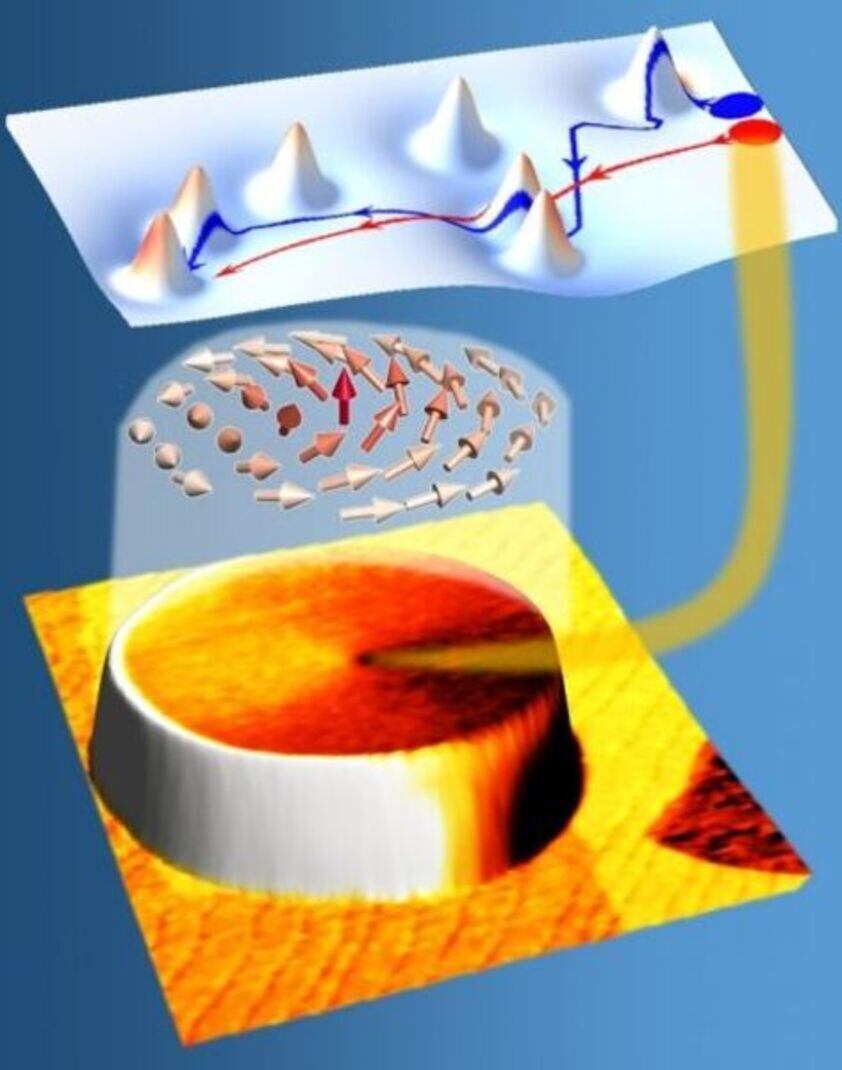 Copyright: © Marco Pratzer The lower image displays the magnetic vortex in color code with its core as a black hole on top of the topgraphy of the iron-island. The middle image sketches the directions of atomic magnets in the vortex core. The top image shows the path of the vortex

The group of M. Morgenstern at RWTH Aachen University and the group of S. Lounis at Forschungszentrum Jülich, united in the Jülich-Aachen Research Alliance, discovered that single foreign atoms halt the motion of magnetic vortex cores that consists of about 10.000 atoms. They studied the resulting interaction in detail with the help of a dedicated scanning tunneling microscope developed in Aachen. The microscope enables imaging and manipulating of the magnetic nanostructures. The surprising novel result of a single atom stopper leads to novel design criteria for modern computer memories and is published in the well reputed journal Nature Communications.

Vortices in the scalp hair, in turbulent water or during windstorms, e.g., in the eye of a hurricane, are extremely stable. The same applies on the nanometer scale being favorable for memory technologies due to the large stability. Natural nanometer size vortices are found, e.g., in magnetic nano-islands of iron (see lower image). The atomic magnets in the island are oriented in circles around the vortex core. At the core, few atomic magnets point out of the plane (see middle image), similar to the core of a whirlpool that develops a deep hole in the center. However, gravity does not act on atomic magnets such that two different core orienta­tions are possible resembling either a deep hole or a huge bump in the whirlpool center.

Switching the vortex core between the two possibilities, hole or bump, is an attractive way to encode information at large storage density, since the magnetic vortex core is only a few nm in size. To switch or read such vortex cores, they are moved on a data highway to corresponding devices. The scientists from Aachen and Jülich discovered now that already single atoms act as significant obstacles on that way and can even stop the intended motion (see lower image). This firstly discouraging result can be used to construct guide rails on the vortex highway by making chains of the obstacles. Thus, novel design rules for modern data memories result.