You Are Here: Omnipresence of Viscous Flow in Graphene Devices

The strength of graphene for electronic applications roots in its immunity against certain scattering effects. Quantum mechanical interference prohibits the electron backscattering at extended obstacles, leading to a significantly larger electron velocity than in classical semiconductors. The electron mobility in graphene at room temperature can indeed be a factor hundred larger than in silicon. The avoided stopping by obstacles raises the fundamental question what eventually limits the electron mobility. Interestingly, it can be the very same effect as in water flow: viscosity.

Viscosity describes the interaction between particles that transfers the friction at the surrounding walls throughout the streaming fluid. The transmitted friction eventually decelerates the whole fluid. The relevance of viscous effects on the flow of electrons in graphene has indeed been demonstrated, but so far only in very clean samples with low disorder and high mobility. The much more natural situation that both disorder and viscosity jointly suppress the electron velocity has not been studied in experiments. 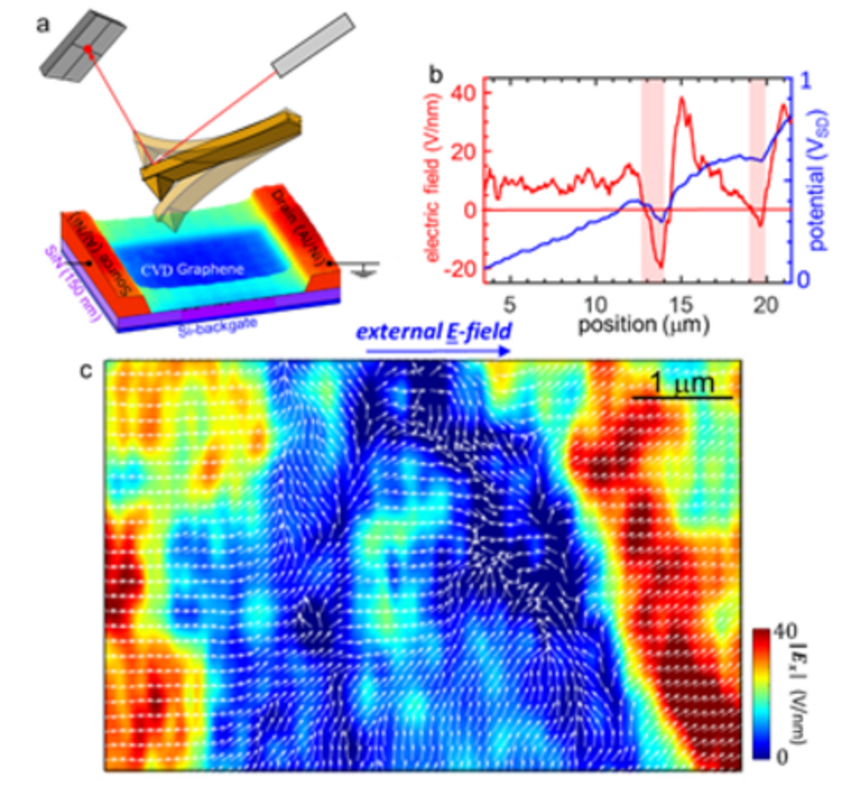 (a) Measurement scheme with field effect transistor of CVD graphene on top of Si backgate and SiN dielectric. The bending cantilever with tip mounted on the bottom is drawn on top. The laser reflection reads out the cantilever bending. (b) Current induced potential (blue) and the resulting in-plane electric field (red) depicted along current flow with highlighted areas of negative electric field, where the field opposes the applied field. (c) Map of the current induced electric field at low electron density displayed as a vector field and as color code for the absolute value in current flow direction. Some white arrows point against the direction of the externally applied field (blue arrow on top).

The authors carefully investigated these regions of tentative uphill flow and found that they typically exhibit the lowest disorder density, so that the electrons get faster in these areas, favoring the appearance of viscous effects. They also showed that the effect of uphill stream can be completely suppressed by artificially increasing the defect density by mild bombardment with Argon ions.

The first author of the paper Sayanti Samaddar, now at the National Physics Laboratory in London, summarizes: “Our results indicate that electron viscosity is not an exotic effect present only in ultraclean graphene samples, but that it is present also in “everyday graphene devices” produced with scalable techniques, like those we might find in future commercial applications of graphene.” Zhenxing Wang, leader of the Graphene Electronic Group at AMO GmbH and co-author of the paper adds: “This nice result popped up from a spontaneous cooperation between physicists and engineers, here in Aachen, and might be relevant for us as engineers too, for better understanding the behavior of our devices.”