You Are Here: Scientists Discover Protected Current Channels on the Surface of Crystals

Scientists Discover Protected Current Channels on the Surface of Crystals

A team of scientists from RWTH Aachen, Forschunszentrum Jülich, TU Dresden, the Max Planck Institute for Chemical Physics of Solids, and the Leibniz Institute for Solid State and Materials Research Dresden have documented evidence of channel-shaped current paths on the surface of a crystal. These paths are protected by the volume of the crystal. 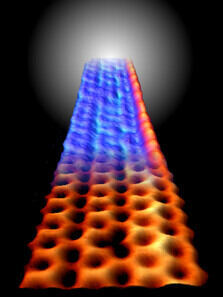 The conductivity of the channels remains even when the material's surface is modified. Professor Markus Morgenstern from the RWTH Chair of Experimental Physics (Solid State Physics) and member of JARA-FIT is enthusiastic: "To conclude a material's ability to conduct current on the surface based on the volume properites is not only astounding but also ensures extremely robust functionality."

The JARA-FIT scientists and their colleagues in Dresden have just published their research results in the renowned professional journal Nature Physics with the title "Subnanometre-wide electron channels protected by topology."

For the past seven years scientists around the world have been intensively working on a new way to describe the transport of electric current in solid states. In the field of topology research conclusions are being made about a material's ability to transport electric current and its surface based on the volume properties. The conductivity of a typical solid is determined by its volume; changes to the solid's volume can also lead to changes regarding the conductivity.

Scientists discovered the current path with the help of scanning tunnel spectroscopy, a method, which makes electron paths visible. The paths found are only four atoms wide. They run along all grooves of the surface, meaning anywhere where the surface indicates a groove, there is automatically a current channel.

Since it is possible to artificially carve such grooves into the surface with a fine point, the course of the current can be determined down to nanometer precision. The paths transport not only current but simultaneously magnetic information, so that a possible application is the direct combination with magnetic storage cells.

The team is currently working on proof of the expected ideal current transport properties and is thinking about future possibilities for application.